Rotational trading is a kind of backtest where you trade by switching positions between various symbols based on their relative score instead of traditional buy/sell/short/cover signals.

Since there are no signals used, only PositionScore assigned to given symbol matters.

It is worth noting that in case of rotational test, the Positions field in General tab of the Analysis settings is ignored. It is only used for regular backtests that use actual buy/sell/short/cover signals.

In the rotational mode the trades are driven by values of PositionScore variable alone.

As you can see the SIGN of PositionScore variable decides whenever it is long or short.

Therefore – if we want to test long-only system in rotational backtesting mode, then we should use only positive values in PositionScore variable. For example – if we are trading a system, which uses 252-bar rate of change for scoring purposes:

Then, to trade only long positions, we should change PositionScore defintion for example to:

This way our scores will remain positive and that will effectively disable short trades.

More information about the rotational mode of the backtester can be found in the manual: http://www.amibroker.com/guide/afl/enablerotationaltrading.html

Filed by Tomasz Janeczko at 9:59 pm under General
Comments Off on Long-only rotational back-test

Separate ranks for categories that can be used in backtesting

When we want to develop a trading system, which enters only N top-scored symbols from each of the sectors, industries or other sub-groups of symbols ranked separately, we should build appropriate ranks for each of such categories. This can be done with ranking functionalities provided by StaticVarGenerateRanks function.

The formula presented below iterates though the list of symbols included in the test, then calculates the scores used for ranking and writes them into static variables. The static variables names are based on category number (sectors in this example) and that allows to create separate ranks for each sector.

// use sectors for ranking
category = sectorID();

Our test should be applied to a watchlist, which contains all symbols we want to include in our ranking code: 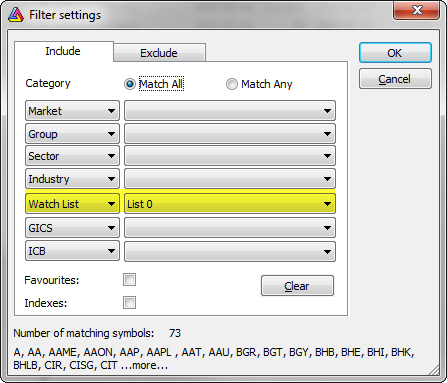 Running the exploration will show two top-ranked symbols for each of the sectors:

We can also change Filter variable definition to

and show all ranked symbols instead.

Such ranking information can be used in backtest and sample rules included at the end of the code use rank information to allow only two top-scored symbols to be traded.

Filed by Tomasz Janeczko at 1:22 am under General
Comments Off on Separate ranks for categories that can be used in backtesting

How to run certain piece of code only once

There are situations where we may need to run certain code components just once, e.g. to initialize some static variables before auto-trading execution or perform some tasks (such as ranking) at the very beginning of backtest or exploration. The following techniques may be useful in such cases:

When we want to execute certain part of code just once after starting AmiBroker, we may use a flag written to a static variable that would indicate if our initialization has been triggered or not.

If we want to run certain part of code at the beginning of the test run in Analysis window, we can use:

When Status(“stocknum”) is detected in the code, then execution is performed in a single thread for the very first symbol. Only after processing of this first symbol has finished the other threads will start.

A practical example showing use of this feature is presented in the following tutorial:

Filed by Tomasz Janeczko at 7:03 am under General
Comments Off on How to run certain piece of code only once

Symbol selection when PositionScore is not defined

AmiBroker’s portfolio backtester allows to define stock ranking and selection criteria by means of PositionScore variable. This is explained in details in the following tutorial chapter:

If PositionScore is not defined or it has the same value for two or more symbols, then AmiBroker will use the following rules:

Filed by Tomasz Janeczko at 9:59 am under General
Comments Off on Symbol selection when PositionScore is not defined

How to handle delisted symbols in rotational test

This Knowledge Base article: http://www.amibroker.com/kb/2014/09/26/closing-trades-in-delisted-symbols/ explains how to close trades in delisted symbols in regular backtest (to avoid holding delisted stocks in the trade list and have our max symbol limit impacted by those positions).

In rotational test however we cannot use Sell variable, because trades are driven by symbols’ ranking by PositionScore values. Therefore we would need to assign zero to PositionScore variable for the exit bars respectively – this will force exiting any positions held in given stock.

Note that we are adjusting the last bar index in case trade delays are set in the settings.

As in the regular test, we can also use DelistingDate information if we have it imported into Symbol ->Information window.

Filed by Tomasz Janeczko at 10:59 am under General
Comments Off on How to handle delisted symbols in rotational test

Sometimes when we optimize our system, we may want to use only a subset of all parameter permutations for our analysis and ignore the others that do not meet our requirements.

For example – if we test a simple trend-following strategy, where we enter long position when short MA crosses above long MA using code such as:

Then, shortPeriods parameter value should remain smaller than longPeriods, otherwise the trading rules would work against the main principle of the tested strategy.

There is an easy way to ignore the unwanted sets of parameters by using Exclude statement in our code. If the variable is true – the backtester will not calculate any statistics for that particular run:

The information from Info tab of Analysis window shows the difference between first execution (all 10000 backtest runs) and second one using Exclude statement. Note reduced number of steps and reduced optimization time.

Filed by Tomasz Janeczko at 5:15 pm under General
Comments Off on Using Exclude statement to skip unwanted optimization steps

After Optimization process has found optimum values for parameters of our trading system, typically we want to use optimum values in subsequent backtesting or explorations. In order to achieve that, we need to manually update default_val (second) argument of Optimize function with the values obtained from the optimization report.

The arguments of Optimize function are shown below (note second parameter marked in dark red color – this is the default value parameter we will be changing after optimization run):

If we perform Optimization process and check the results (for this example we use Net Profit as the optimization target), we can see that the best results use Periods = 6 and Level = 126.

Now in order to run backtest and obtain exactly the same results as in the respective line of the above Optimization results, we need to enter the values into default argument, so the modified code will look like this:

Now we can use the code with modes other than Optimization and the formula will use optimized values we retrieved from the results.

Filed by Tomasz Janeczko at 5:20 am under General
Comments Off on Using optimum parameter values in backtesting

How to copy backtest trade list to a spreadsheet

There are several ways to transfer the backtest results to a spreadsheet.

Filed by AmiBroker Support at 3:14 pm under General
Comments Off on How to copy backtest trade list to a spreadsheet